“Collection of BOOKS … A Catalogue of which may be seen at said Store.”

Henry Knox is most often remembered as the general who oversaw artillery for the Continental Army during the American Revolution and the new nation’s first Secretary of War in George Washington’s cabinet.  Before the Revolution, however, Knox earned his livelihood as a bookseller in Boston.  He frequently advertised books and stationery available at his “LONDON BOOK-STORE” in the Boston Evening-Post and other newspapers.  In an advertisement that ran in February 1772, for instance, he promoted a “Large and valuable Collection of BOOKS” as well as “Writing Paper of all Sorts and Sizes … and almost every other kind of Stationary.”

Knox did not name any of the titles he had on hand, but he did list several genres, including “Divinity, History, Law, Physick, and Surgery” and “A Variety of New Novels, Sea Books, All Kinds of School Books, and Classical Authors.”  To entice prospective customers to visit, he confided that “A Catalogue … may be seen at said Store.”  Many booksellers supplemented their newspaper advertisements with other marketing materials, including trade cards, broadsides, and catalogs.  Some historians of early American print culture have cast doubt on how many book catalogs booksellers actually produced and disseminated, suggesting that many catalogs mentioned in newspaper advertisements never materialized.  In this case, however, Knox likely referred to a thirty-two page “Catalogue of books, imported and to be sold by Henry Knox, at the London Book-Store, a Little Southward of the Town-House, in Cornhill, Boston, MDCCLXXII.”  At least two copies survive, one held by the Grolier Club in New York and the other in the collections of the Sterling Memorial Library at Yale University.

Knox distributed at least one other catalog before the American Revolution.  The Library Company of Philadelphia and the Wellcome Institute for the History of Medicine Library in London each have an undated catalog that highlighted titles by “Much Esteemed Authors in Physic and Surgery.”  That four-page catalog has tentatively been dated to 1772 because the copy in the collections of the Library Company has been bound with and precedes A New Lecture on Heads by George Alexander Stevens, originally printed in London and reprinted for Henry Knox in 1772.  Just as books published in the twenty-first century often include advertisements for other books, printers and booksellers in early American sometimes inserted advertising in the books they produced and sold.

The catalogers at the American Antiquarian Society provided invaluable assistance in telling the story of Henry Knox and his book catalogs. 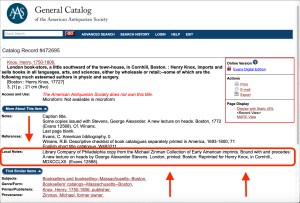