“WADE and HEMPHILL’s NEW STORE, in Wilmington, will be continued as usual.”

Francis Wade ran two shops, one on Second Street in Philadelphia and another in nearby Wilmington, Delaware. The latter he operated in partnership with William Hemphill. Wade intended to “leav[e] off the retail business,” and placed an advertisement to that effect. He sought to liquidate his merchandise in an eighteenth-century version of a going out of business sale, “selling off all his stock in trade, at prime cost … for cash only.” He also called on former customers to settle their accounts or else face legal action.

Although the Philadelphia location was closing, “WADE and HEMPHILL’s NEW STORE, in Wilmington, will be continued as usual by William Hemphill.” In the final paragraph of his advertisement, a paragraph devoted to the Wilmington location, Wade outlined some of the common commercial practices that allowed many colonists, especially those who lived in the hinterlands beyond the major urban ports, to participate in the consumer revolution.

Wade and Hemphill purchased surplus crops from country farmers who transported wheat, flaxseed, and produce to ports as part of an export market directed to other North American colonies and the Caribbean. Although the partners paid “the highest prices … in cash,” they anticipated that farmers and their families would spend at least some of that money on merchandise in their store.

To facilitate such trading, Wade underscored some of the advantages that benefited farmers in Philadelphia’s hinterland who chose to deal with Wade and Hemphill’s New Store in Wilmington. The partners purchased wheat and flaxseed “at the Philadelphia prices,” so farmers would not lose any money by opting for the smaller port. In fact, many of them would save valuable time and money because “the road from Lancaster county is 15 miles shorter to Wilmington than Philadelphia, and no ferriage.” Wade offered this information as “an inducement for the wagons to come that way with their loading.” If he managed to convince farmers in the countryside, Wade stood to attract more customers and obtain larger quantities of produce to export for profit.

Wade’s advertisement suggests that colonists did not engage solely in sustenance farming, growing just enough to meet the needs of their family. Instead, they intentionally raised agricultural surpluses with the intention of taking them to market for export elsewhere in the Atlantic world. In turn, they used some of the revenues generated from such sales to purchase both necessities and imported goods they merely desired. Merchant-shopkeepers like Francis Wade and William Hemphill facilitated such transactions, giving many colonists – even those beyond major port cities – access to consumer culture.

“Samuel Young … begs Leave to notify the Gentlemen and Ladies of Town and Country.”

Samuel Young of Providence was new to shopkeeping, but he demonstrated in his first advertisement that he understood the conventions of eighteenth-century advertising. He incorporated several of the most common marketing appeals of the era, including price, quality, and consumer choice. He opened his notice with a pledge to “sell as cheap for Cash, as any Person in this Town, or elsewhere” and concluded by reiterating that he offered “the lowest Prices.” He went into greater detail about the “most excellent Quality” of his “European GOODS,” claiming that “all who have passed their Judgment on them” acknowledged “that they are better wrought than any that have yet been exposed to Sale here.” Similarly, he sold “the best of West-India Goods.” Savvy consumers probably greeted these boasts with some skepticism. After all, Young sold the same imported goods as his competitors. Although he did not enumerate his wares, Young stated that they comprised “a great Variety” and were “finely suited to the Wants of the People.” Hyperbolic at times, Young did not merely place a notice that announced he opened a new shop. Instead, drew on techniques already popular in consumer advertising to market his merchandise.

As a newcomer to his occupation, Young also attempted to reassure potential customers about his own character, arguing that he possessed the personal qualities to make sure they would receive satisfactory treatment during transactions. He was not afraid of hard work, intending to “give constant Attendance at his Shop.” He also seemed sensible that some of his claims came off a bit overstated. To that end, he persuaded readers “that he doth not mean to delude and betray People by false Pretensions.” Instead, he simply wished to “establish himself in the World, on the firm Foundation of Truth and Integrity.” Young’s advertisement appeared alongside commercial notices by shopkeepers with established reputations. He realized that he needed to make bold claims to attract attention to his business while simultaneously cultivating his own standing as an honest and fair dealer.

“Cheaper for Cash than can be had at Capt. Nathl. Backus’s, or any Store in Norwich.”

Ebenezer Coburn sold “All Sorts of Iron-Mongery, and Cutlery Ware … at his Shop … at the Sign of the Black Horse, at Norwich-Landing” in Connecticut. In marketing his wares, he resorted to one of the most common appeals in eighteenth-century newspaper advertisements, low prices, promising that customers could purchase his merchandise “cheaper for Cash” from him than from “any store in Norwich.” Merchants and shopkeepers throughout the colonies frequently made similar claims. Many simply stated that they had low prices, but others specified that they offered the best prices in town and would not be undersold by any of their competitors. A few even boasted that they offered the lowest prices in the entire colony or the region, especially in New England.

In that regard, Coburn’s notice replicated standard advertising practices. Yet he deviated from most other advertisements in one significant way: he named one of his competitors and explicitly stated that his prices were lower. Before even mentioning other shops in Norwich, Coburn singled out Captain Nathaniel Backus. In their advertisements, most shopkeepers either graciously pretended that their competitors did not exist or politely acknowledged them by indicating that their own shop had the best prices. Coburn, on the other hand, fired a shot in a price war with Backus, challenging consumers to take special note of what the captain charged for his wares.

Why did Coburn take aim at Backus in particular? Was the captain the most prominent trader in Norwich and thus Coburn’s most significant competitor? Had Backus established a reputation for especially low prices that Coburn hoped to turn to his advantage? Did some sort of personal, rather than professional, animosity exist between Coburn and Backus? The captain was a man of some prominence in Norwich, a descendent of the founders of the town and one of only six men who owned his own carriage prior to the Revolution. He exercised some clout in the local marketplace.

Something happened relatively recently that caused Coburn to compare their prices. Two weeks earlier he had published a nearly identical advertisement in the New-London Gazette; it did not mention Backus or that Coburn sold “by Wholesale or Retail.” Given the number of vessels that had “Entered In” according to the recent shipping news, Backus very well may have recently received a large shipment of imported goods, enough to seemingly flood the local market in Norwich. By naming Backus in particular, Coburn may have been trying to gain ground on his most prominent and most significant competitor, one who commanded the attention of local consumers even without advertising in the New-London Gazette.

“Have their Work done by Men who have been regularly brought up to the different Branches of Trade.”

Elkanah and William Deane made coaches “At their Shop in Broad-Street, New-York.” At the same location they also did “Coach-Harness Work, and Saddler’s-Work of every Kind.” The Deanes apparently were not impressed with many of their competitors, issuing sharp words about the quality of work customers could expect from other shops. In a nota bene they asserted, “The above named DEANE’S, have their Work done by Men who have been regularly brought up to different Branches of Trade, and not be Apprentice Boy’s, whose Master’s never knew the Business, or perhaps ever saw a Coach making in their Lives.”

The quality promised by the Deanes resulted from specialized training by qualified artisans. They accused competitors of hiring workers who had supposedly been through apprenticeships, but they cast doubt on the caliber of expertise and experience possessed by some of the supposed masters who trained the next generation of coachmakers and artisans in related occupations, such as harnessmakers and saddlers. The Deanes warned that prospective customers needed to heed not only the credentials of the coachmaker who ran a shop but also those of anyone employed in that shop. After all, the owner of a shop did not undertake all the work but instead distributed it and oversaw the labor of others. The Deanes took responsibility for the work done by every employee in their shop, pledging that they only hired experienced “Men who have been regularly brought up to the different Branches of Trade.”

Assuring potential customers of the quality of the work produced in their shop was so important to the Deanes that they offered a one-year guarantee. Whether repairs to coaches or new harnesses or saddles, everything that came out of their shop was “warranted for Twelve Months.” By providing a guarantee, the Deanes underscored that their scathing comments about training and expertise were not merely idle boasts. They could afford to guarantee their work because they were so confident in their own skills and experience as well as those of everyone who worked in their shop.

Most of the evidence suggests that advertisers submitted copy to printers who then determined the format, though negotiations took place and special requests were sometimes honored (perhaps for an additional fee). Gionovoly may have worked closely with James Johnston, the printer of the Georgia Gazette, to create an advertisement with distinctive visual appeal. Alternately, he may have made a general request but offered no specifics. On the other hand, the format of the tailor’s advertisement may have been entirely due to the printer’s own initiative.

Regardless of who was responsible for each visual element of the advertisement, it effectively deployed varied fonts and sizes. It also included just enough white space to accentuate those variations. The headline of the advertisement – “DAVID GIONOVOLY, Taylor” – was set in the largest font used on that page (or anywhere else in the issue, with the exception of the masthead). Both capitals and italics further emphasized the tailor’s name, giving him an appropriate sense of style that anyone in the garment trades would have wanted to communicate to potential customers. The ornate font for the next line – “Gives this Publick Notice” – also appeared in other advertisements, but not so many that it did not seem novel in Gionovoly’s notice. The remainder of the advertisement had a standard format and incorporated the usual sorts of appeals – “work done after the best manner, and with the greatest dispatch” – but the lack of innovation in the copy may not have mattered as much as making sure that readers noticed the advertisement at all.

These tables indicate how many advertisements for slaves appeared in colonial American newspapers during the week of May 21-27, 1767. 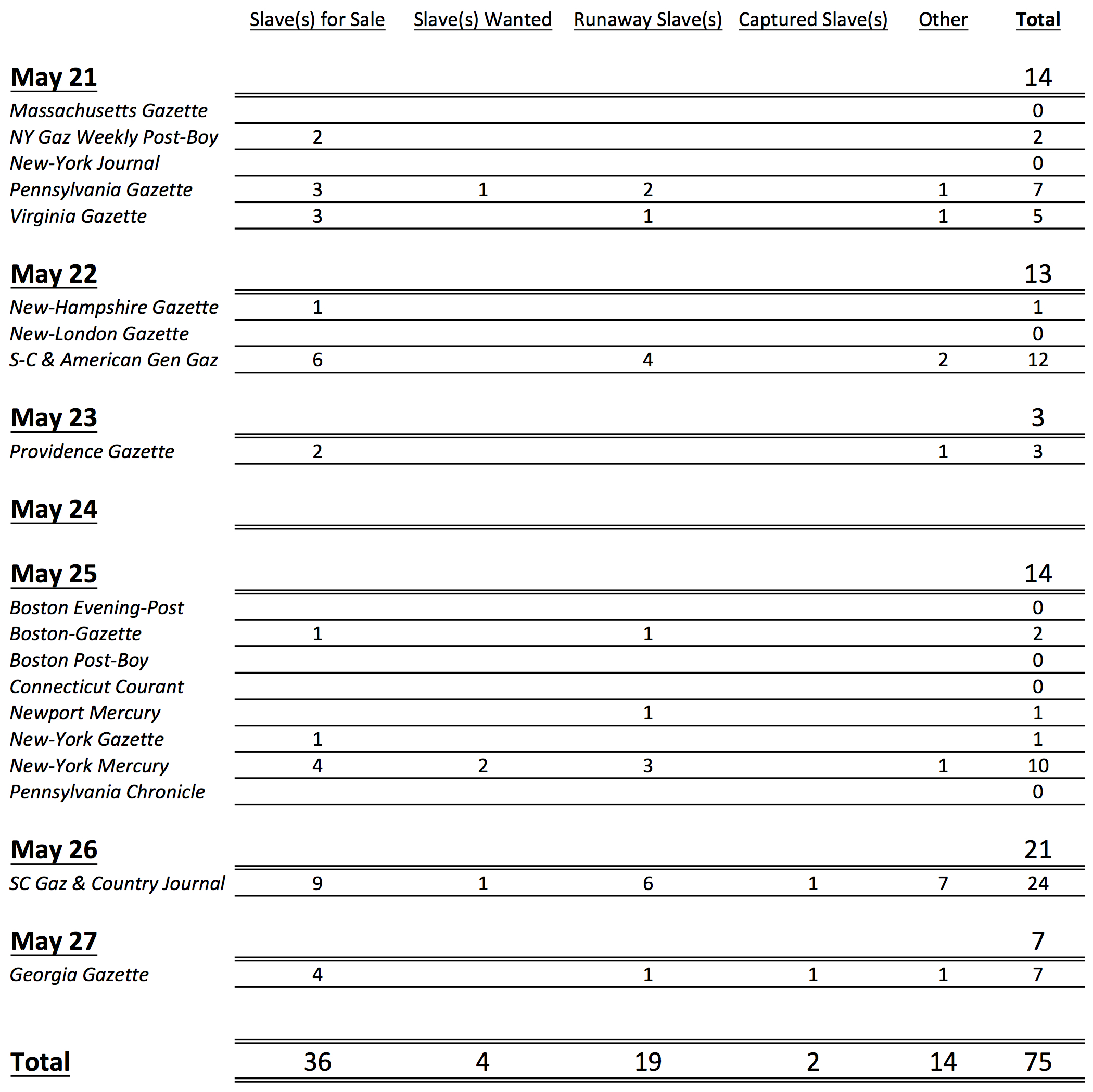