“Slaves, as may be absent from their master’s Houses and walking the Streets.”

Only one advertisement concerning slaves appeared in the December 25, 1766, issue of the Massachusetts Gazette. Rather than seeking to buy or sell slaves or offering rewards for runaway slaves, it aimed to regulate the activities and movements of “Negro, Indian or Mulatto Slaves” in Boston.

Apparently the selectmen of the town received complaints about slaves “absent from their master’s Houses and walking the streets” in the evenings and into the night. In response, they issued “strict Orders to the Watchmen of the Town” to detain any slaves they encountered on the street “after Nine o’Clock at Night.” The watchmen were permitted to make exceptions, provided slaves made “good and satisfactory Account of their Business.” In order to demonstrate that they were not up to some sort of skullduggery, slaves traversing the streets at that hour needed to carry lanterns with lit candles, making it easier to spot them and preventing them from seeming to sneak from place to place. The advertisement concluded with a threat against masters and slaves: “such Offenders may be proceeded with according to Law.” Advertisements for runaway slaves were intended to regulate the movements of enslaved men and women, to return them to the authority and oversight of their masters. This advertisement, on the other hand, regulated both slaves and masters, instructing slaveholders who had been lax in supervising their slaves to become more vigilant and strict.

As an aside, it might seem especially appropriate today to examine the marketing aspects of an advertisement for consumer goods and services that appeared 250 years ago. After all, Christmas has increasingly become a celebration of consumerism in modern America. Isn’t this advertisement regulating the movement of slaves a missed opportunity considering all of the advertisements more explicitly linked to consumer culture?!

The Christmas holiday, however, did not garner the same attention in colonial America, especially not in New England among the descendants of Puritans. (Observing Christmas had been banned in New England in the seventeenth century.) Colonists certainly did not indulge in rampant exchanges of gifts and all of the buying and selling associated with giving presents. Accordingly, in choosing an advertisement for today I have refrained from hyping consumerism and imagining Christmas celebrations that did not exist in colonial New England. Instead, I have selected an advertisement that reveals one of the more pressing concerns in Boston on December 25, 1766.

“As he is a young beginner, he hopes by close application to his business to give entire satisfaction.”

John Richards, a blacksmith, could tackle any sort of job customers brought to him: “Ship, Plantation, and Gun Work, and all Work necessary to be done about a House.” He pledged that he would complete any task “in the best manner, on the most reasonable terms, and with the quickest dispatch.” In so doing, he reiterated many of the appeals commonly made by other artisans in their advertisements: quality, price, and efficiency.

Many artisans also emphasized their years of experience, suggesting that quality and efficiency in particular derived from years pursuing their trade. Richards was not in a position to make such a claim, so he took a different tack. Describing himself as “a young beginner,” he promised to devote “close application to his business.” He acknowledged that he had not yet worked in the forge for years, but he turned that into a virtue. He had not yet established a reputation for the quality of his work among the resident of Savannah, but that meant that he would only try harder by carefully attending to his business. Realizing that sincere effort alone would not produce products customers approved, he guaranteed “entire satisfaction to all who may be pleased to favour him with their custom.” Richards encouraged potential customers to take a chance on “a young beginner” through his assurances that he would labor to conscientiously fulfill their orders until they were pleased with his work.

In his autobiography, Benjamin Franklin identified thirteen virtues that he cultivated in order to become a successful artisan and, more generally, a better person. Franklin listed Industry as his sixth virtue: “Lose no time; be always employ’d in something useful; cut off all unnecessary actions.” Franklin’s autobiography had not yet been published at the time Richards composed his advertisement, but the young blacksmith did not need a luminary to point out the value of industriousness. Richard already understood its importance and expected that potential customers who read his advertisement understood it as well.

These tables indicate how many advertisements for slaves appeared in colonial American newspapers during the week of December 18-24, 1766. 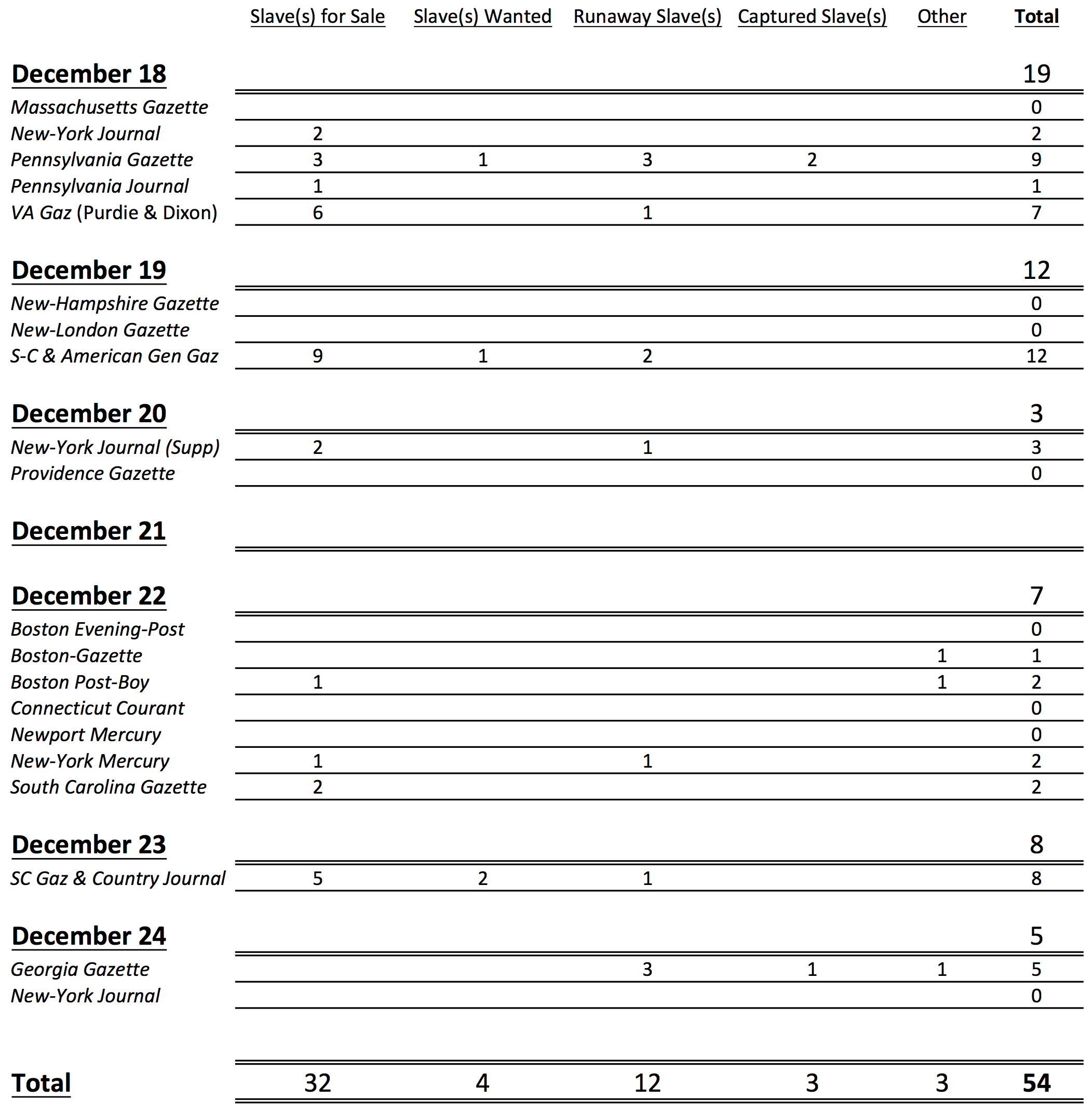 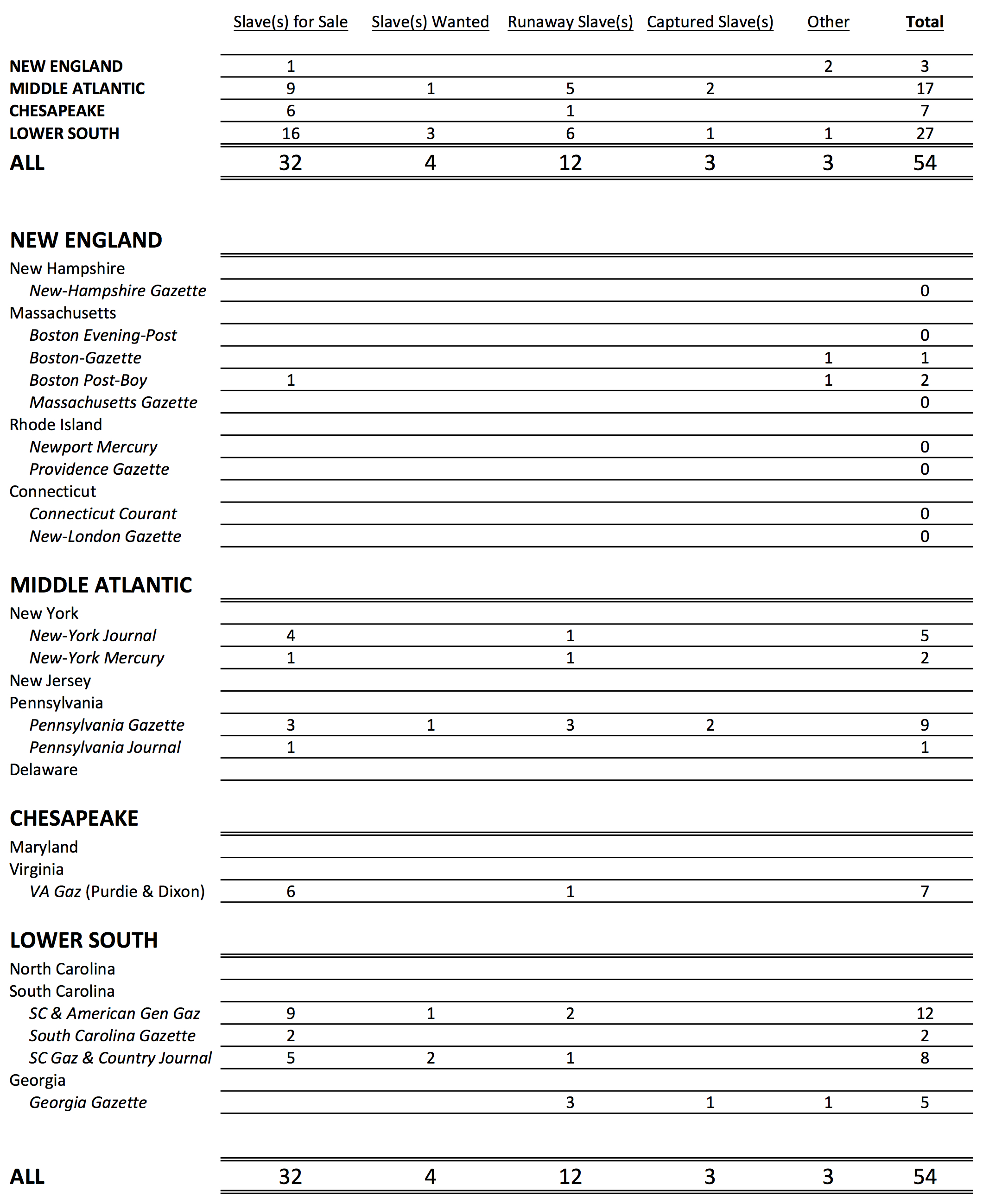 Most eighteenth-century advertisements – whether promotions of consumer goods and services, legal notices, or other sorts of announcements – tended to be local, which made this advertisement for “CARVER’S Wharf, at Gosport” at the entrance of Portsmouth Harbor in southern England rather unique. Very rarely did advertising in colonial newspapers originate on the other side of the Atlantic.

Merchants and masters of vessels frequently placed advertisements announcing when ships were scheduled to sail for England and other destinations. Half a dozen such advertisements, seeking to contract for “Freight or Passage,” appeared in the December 23, 1766, issue of the South-Carolina Gazette and Country Journal, accompanied by woodcuts of ships to make them easily identifiable at a glance. Such advertisements, however, rarely elaborated on how any cargo would be handled once it arrived at its destination.

This advertisement for “CARVER’S Wharf, at Gosport,” on the other hand, addressed many concerns merchants, planters, and other producers might have had concerning the logistics of getting rice, indigo, hides, and other goods to markets in England. The harbor was deep enough for ships loaded with rice and other cargo to “lay a-float at all Times of the Tide.” In addition, “the Wharf is now covered,” which meant that cargo could be offloaded regardless of the weather. Despite its location about eighty miles south of London, mail service to the capital operated every day, making it convenient to contact business associates. To aid in moving cargoes to market, numerous porters and wagons could be hired at Gosport. These factors numbered among the “many Additions and Improvements lately made,” but the advertisement also promised “many other Advantages attend the Proprietors of Ships and Cargoes too tedious to mention.”

The Adverts 250 Project usually examines advertisements that addressed potential customers in efforts to incite consumption. Today’s advertisement, however, shows portions of the other side of the process by focusing on exporting rice and other goods. Production and distribution of staple crops and other goods helped make it possible for colonists to participate in the consumer revolution. Sometimes producers were the targets of advertisements that offered services to facilitate commerce.

“A General Assortment of English Goods.”

Elizabeth Williams operated a shop out of her “House in Beer Lane, near the Rev. Mr. Pemberton’s Meeting-House” in Boston. She imported “a general Assortment of English Goods” from London, including “Cotton Velvets,” Mens mill’d Hose, Gloves and Caps,” and “Stationary & hard Ware.” Although she listed approximately two dozen types of merchandise, she also carried “a variety of other Articles, to many to be here inserted.”

In promoting a variety of consumer goods recently imported from English ports, Williams advanced one of the most common marketing appeals of the eighteenth century. She offered choices to potential customers, drawing them in by naming popular items and by promising even more for shoppers to discover and examine once they were in her shop. Indeed, “variety” was important in Williams’ marketing efforts. In addition to general descriptions of her merchandise, she inserted the word into her list twice: “A variety of Broad Cloths” and “A great Variety of Coat and Breast Buttons.” Her customers would not be stuck with whatever she happened to have on hand; instead, they could choose according to their own tastes.

Williams also made appeals to price, noting that she sold her English goods “at the lowest Advance.” For one product, “yard-wide Irish Linnens,” she had several different sorts “of all Prices,” again offering choices to her potential customers. In addition, she made implicit appeals to fashion when she listed several textiles, as well as an explicit appeal when she described her candlesticks as “New-fashion.”

In making appeals to choice, price, and fashion, Williams adopted several of the most popular marketing strategies deployed by her male competitors. In that regard, little distinguished her advertisement from others except that a woman’s name appeared at the beginning. Other historians have demonstrated that in the busiest urban ports, like Boston, as many as one-third of shopkeepers were women by the middle of the eighteenth century, although they do not comprise such a high proportion of advertising for consumer goods and services. Women faced challenges when they operated retail establishments, but they were not excluded from participating on the supply – rather than the consumption – side of the marketplace. Elizabeth Williams’ advertisement demonstrates one method used by some female shopkeepers to integrate into a male-dominated occupation.

“A fresh and general Assortment of Drugs and Medicines.”

Thomas Bridgen Attwood and Edward Agar both sold patent medicines recently imported from London, but the competitors advanced different strategies for attracting customers in their advertisements. Readers of the December 20, 1766, supplement to the New-York Journal encountered notices from both druggists in the center column on the second page, separated by only three other advertisements.

Like many shopkeepers, Agar provided a partial list of his merchandise, hoping to entice potential customers interested in particular products. Among “numberless other articles in the medicinal way,” Agar carried a dozen patent medicines that he mentioned by name: “DR. James’s fever powders, Hill’s pectoral balsam of honey, … Turlington’s balsam, Greenough’s tincture for the teeth, Lockyer’s pills, Anderson’s [pills]; Dr. Ward’s essence for the head-ach, Bateman’s drops, Stoughton’s bitters, Daffy’s elixir, Godfrey’s cordial; … [and] Dr. Ryan’s sugar plumbs for worms.” Colonists would have recognized each of these, just as modern consumers associate particular brands with specific symptoms and remedies.

Attwood depended on that familiarity, refraining from inserting any sort of list. Instead, in a separate paragraph (headed with a manicule to draw attention to it), he promised “The most approved patented Medicines, warranted genuine, from the Original Warehouses.” His advertisement appeared just below Agar’s, making any sort of list unnecessary since his competitor already named many of the most popular eighteenth-century patent medicines. However, even without such fortuitous placement of the two notices, Attwood could have depended on potential customers’ ability to identify a variety of medicines and makers on their own. He chose instead to focus on the services that he provided, including compounding new prescriptions and filling “Country Orders” from those who contacted him by letter rather than visiting his shop.

In general, Agar emphasized selection while Attwood accentuated service. The druggists found common ground when they each promised low prices, one of the most common appeals made to consumers in eighteenth-century advertising. Attwood, more economical in his use of words, pledged to “Sell at the very lowest prices, wholesale and retale.” Agar, the more verbose of the two, stoutly proclaimed that he sold imported patent medicines “on the lowest terms they can possibly be afforded by any one in America.” Which swayed potential customers? Agar’s extravagant assertions about his prices? Or Attwood’s variety of consumer-centered services?