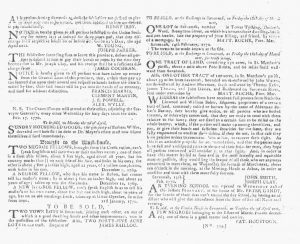 James Johnston, the printer of the Georgia Gazette, rarely issued a supplement to the standard four-page edition, but on February 28, 1770, he had sufficient content to merit distributing a smaller sheet that consisted entirely of advertising. Unlike supplements that accompanied most other colonial newspapers, this one did not bear a masthead.  Instead, a notation at the bottom of the page tied it to the standard issue.  The notation, “[No. 334.],” matched the issue number in the masthead of the February 28 edition.

Printed on both sides, the supplement included eighteen additional advertisements.  Those notices represented significant revenue for Johnston.  Like other eighteenth-century printers, he depended on advertising to make publishing a newspaper economically viable.  Subscription fees alone did not pay for the production and dissemination of the news.  That meant that Peter Gandy contributed to the process when he placed an advertisement about an “EVENING SCHOOL … for the benefit of those who can’t attend the day school.”  Yet it also meant that Patrick Houston did as well when he advertised “FEW NEGROES belonging to the estate of Martin Fenton.”  The warden of the workhouse did as well when advertising “TWO NEGRO FELLOWS, brought from the Creek nation, … A NEGROE FELLOW, who says his name is Boston, … [and] A NEW NEGRO FELLOW, can’t speak English so as to tell his master’s or his own name.”  Those were two of the many advertisements about enslaved men, women, and children that ran in the February 28 edition of the Georgia Gazetteand its supplement.

At the same time that Georgia’s only newspaper carried news about the imperial crisis that ultimately culminated in the American Revolution it also disseminated advertisements that offered enslaved people for sale or that encouraged colonists to engage in surveillance of Black bodies to recognize and recapture those who escaped from bondage. Depictions of liberty and slavery appeared side by side in the pages of colonial newspapers.  Advertisements, in their attempts to maintain the enslavement of Africans and African Americans, funded coverage of the purported abuses that colonists supposedly suffered at the hands of Parliament.  Early American advertising contributed to the paradox of liberty and slavery present at the founding of the new nation.

In the late 1760s, the Connecticut Journal, published in New Haven by Thomas Green and Samuel Green, carried significantly less advertisements that most newspapers printed elsewhere in the colonies. Such was the case for some of the newspapers from smaller towns. For instance, the September 8, 1769, edition of the Connecticut Journal contained only four advertisements. The printers placed two of those advertisements themselves. In one, they announced “A Plan of Exercise, fro the Militia of the Colony of Connecticut” for sale at their printing office. In the other, they promoted two tracts concerning religion, one that would be available soon and the other already in stock.

The other two advertisements merit particular notice. Both offered enslaved people for sale. One described “a healthy, strong NEGRO FELLOW, 22 or 23 Years old” who had “had the Small-Pox” and thus was not at risk of contracting it again. The other listed “a likely Negro Wench, aged about 23 Years” and also “a Negro Girl, between 2 and 3 Years of Age.” Nicholas Street, the colonist who held them in bondage, described the woman as “strong and healthy,” not unlike the “NEGRO FELLOW” in the other advertisement, and specified that she was “well-skilled in all Business suitable for a Wench.” He did not indicate the relationship between the woman and the girl, leaving readers to reach their own conclusions about whether Street compounded the violence being done by separating family members. He certainly did not express any compunction about selling the woman and girl separately.

Advertisements were an important source of revenue for printers. Paid notices made newspapers viable ventures; they funded the circulation of the news far and wide during the era of the American Revolution. Advertisements concerning enslaved people, whether offering them for sale or seeking the capture of those who attempted to seize their liberty by escaping, accounted for a significant portion of the paid notices that made it possible for printers to continue publishing newspapers. These two advertisements in the Connecticut Journal are especially striking because they represent the only advertising revenue the Greens accrued for the September 8 edition. Even in New England, enslavement was enmeshed in print culture. The two served as bulwarks for each other. Newspapers perpetuated slavery through the frequent publication of advertisements concerning enslaved people, while the advertising fees collected from enslavers contributed to the continuing operations of every newspaper published in colonial America.

“TO BE SOLD … A Likely, strong, and remarkably healthy Negro Girl.”

The Essex Gazette commenced publication in Salem, Massachusetts, on August 2, 1768. The colophon at the bottom of the final page advised readers that it was “Printed by SAMUEL HALL, at his Printing-Office a few Doors above the Town-House; where SUBSCRIPTIONS, (at Six Shillings and Eight Pence per Annum) ADVERTISEMENTS, &c. are received for this Paper.” The first issue included half a dozen advertisements that Hall apparently solicited in advance of publication. Hall certainly included those advertisers in the message he addressed “To the PUBLICK” in the inaugural issue. He “return[ed] my sincere Thanks to every Gentleman, who has, in any Manner, patronized and encouraged my Undertaking.” Those first advertisers included an apothecary, a tailor, a shopkeeper, and a tavernkeeper. Each offered consumer goods and services to the residents of Salem and its environs.

Readers were accustomed to seeing those sorts of advertisements in the several newspapers published in nearby Boston as well as other newspapers that circulated in New England. They were also accustomed to seeing other sorts of paid notices, those that offered enslaved men, women, and children for sale or announced rewards for the capture and return of runaways slaves. It did not take long for advertisements for people reduced to commodities to find their way into the Essex Gazette. In issue “NUMB. 8,” only seven weeks after Hall distributed the first issue of the Essex Gazette, the first advertisement mentioning a slave appeared in the new publication, one of only six paid notices in that issue. In it, James Lee announced that he sought to sell a “Likely, strong, and remarkably healthy Negro Girl, between 11 and 12 Years of Age.” She would make a good domestic servant, already being “well acquainted with the Business of a Family” and knowing how to knit, spin, and sew.

Practically from the start of this new endeavor printer Samuel Hall was enmeshed in the business of human bondage. The success and continued publication of the Essex Gazette depended on those who “patronized and encouraged” the venture, including those who placed advertisements that generated revenue that sustained the newspaper. Even as the news items printed elsewhere in the Essex Gazette addressed questions concerning the “invaluable Rights and Privileges, civil and religious” of the colonists, advertisements contributed to the perpetuation of slavery in Massachusetts during the era of the American Revolution.