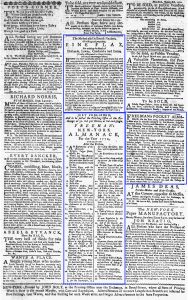 In the final week of January 1770, John Holt continued in his efforts to rid himself of surplus copies of Freeman’s New-York Almanack, for the Year of Our Lord 1770. He did so much more vigorously than other printers who reduced the length and size of their advertisements significantly as January came to an end, perhaps an indication that Holt seriously miscalculated demand for Freeman’s New-York Almanack, printed far too many, and now had an excessive quantity on hand.

Three advertisements for the almanac appeared on the final page of the January 25 edition of the New-York Journal, Holt’s newspaper. He exercised his privilege as the printer to insert and arrange advertisements as he saw fit. The first of those notices was not at first glance an advertisement for the almanac. Instead, it appeared to be a public interest piece about “raising and preparing FINE FLAX” and the advantages of “farmers in North America” doing so. A separate paragraph at the end, just two lines preceded by a manicule, informed readers that “The whole process of raising and managing this flax is inserted in Freeman’s New-York Almanack for the year 1770.” That note appeared immediately above the most extensive of Holt’s advertisements for the almanac. He had previously run the notices about “FINE FLAX” and the almanac separately, sometimes even on different pages, and left it to readers to discover the synergy for themselves. A month into the new year, however, he no longer left it to prospective customers to make the connection on their own.

To further increase the likelihood that prospective customers would take note of the almanac, Holt placed a third advertisement next to the second one. Even if readers perused a page comprised almost entirely of advertisements so quickly that they did not notice how the “FINE FLAX” advertisement introduced an advertisement listing the contents of the almanac, it would have been difficult to skim all three columns without taking note of Freeman’s New-York Almanack.

Holt’s advertisements for the almanac accounted for a significant portion of the January 25 edition of the New-York Journal. Even taking into account the two-page supplement distributed with it, the entire issue consisted of only eighteen columns. The three advertisements for the almanac filled more than an entire column, displacing news items and editorials that Holt could have published instead. He apparently calculated that he included sufficient news between the standard issue and the supplement to satisfy subscribers, thus allowing him to aggressively advertise the almanac.